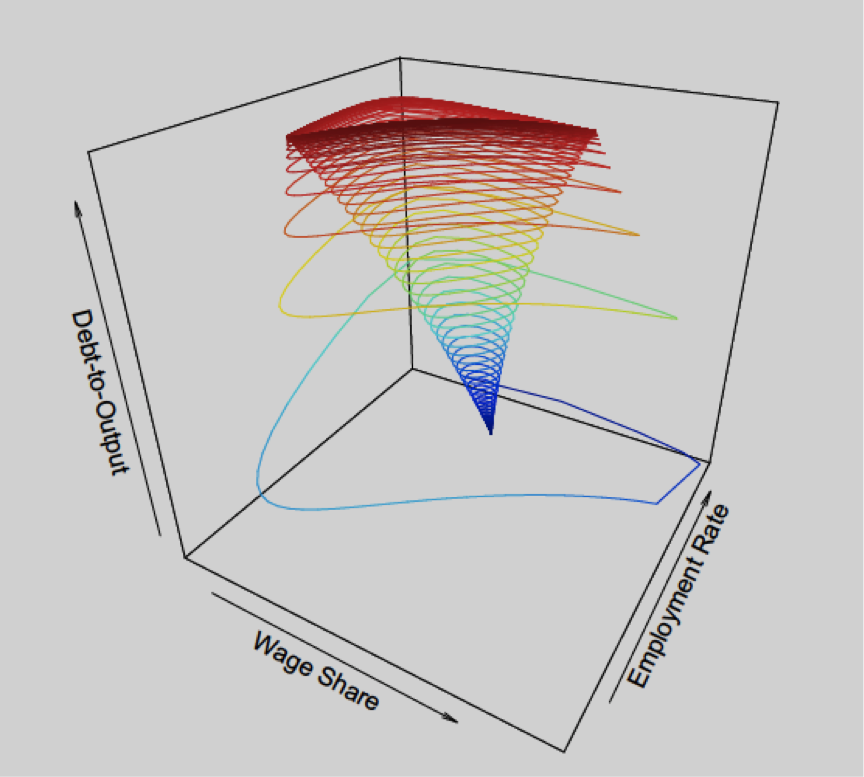 This paper follows van der Ploeg (Metroeconomica 37(2):221–230, 1985)’s research program in testing both its extension of Goodwin (in: Feinstein (ed) Socialism, capitalism and economic growth, Cambridge University Press, Cambridge, 4, 54–58, 1967) predator–prey model and the Minsky Financial Instability Hypothesis (FIH) proposed by Keen (J Post Keynes Econ 17(4):607–635, 1995). By endowing the production sector with CES technology rather than Leontief, van der Ploeg showed that the possible substitution between capital and labor transforms the close orbit into a stable focus. Furthermore, Keen (1995)’s model relaxed the assumption that profit is equal to investment by introducing a nonlinear investment function. His aim was to incorporate Minsky’s insights concerning the role of debt finance. The primary goal of this paper is to incorporate additional properties, inspired by van der Ploeg’s framework, into Keen’s model. Additionally, we outline possibilities for production technology that could be considered within this research program. Using numerical techniques, we show that our new model keeps the desirable properties of Keen’s model. However, we also demonstrate that when the economy is endowed with a class of CES production function that includes the Cobb–Douglas and the linear technology as limit cases, the unique stable equilibrium is an economically desirable one. Finally, we propose a modified extension that includes speculative component in the economy as in Grasselli and Costa-Lima (Math Financ Econ 6(3):191–210, 2012) and investigate its effect on the dynamics. We conclude that CES production function is a more suitable assumption for empirical purposes than the Leontief counterpart. Finally, we show, using numerical simulations, that under plausible calibration, the model endowed with CES production function eventually lose the cyclical property of Goodwin’s model with and without the speculative component.

The paper can be downloaded: here